Start / Aktuellt / Forskningsrapport / Combining excellence in education, research and impact: inspiration from Stanford and Berkeley and implications for Swedish universities

Universities are operating in a rapidly changing global context. Growing mobility, intensifying global competition for students and talent, changing demands and new methods of education are some of the factors that are forcing universities to re-examine their role, functioning and position both in their surrounding society and in the global arena.

In Sweden higher education and research are still primarily discussed within a national context, without sufficiently considering that both will increasingly be affected by the global competition for both students and faculty: “Swedish universities compare themselves and compete primarily with each other, not with their equivalents in other countries” (Strömbäck 2013, p.38). This is one of the reasons we decided to carry out a comparison of Swedish universities with Stanford and the University of California Berkeley. We are well aware that there are significant limitations to such comparisons and that Stanford and Berkeley, and the US university system in general, face their own challenges. Nonetheless, as we argue in this paper, they form a useful basis for comparison and assessment of Swedish universities in a global context.

In particular, we have identified factors which have allowed Stanford and Berkeley to combine excellence in teaching, research and impact. We argue that some of these factors, such as linking research and education, the importance attached to education and teaching, recruitment mechanisms, and career development paths, ensure that these universities attract the best students and faculty and contribute significantly to societal development both in their region and globally. These factors seem critical in ensuring universities’ future relevance and competitiveness.

When comparing Swedish universities with Berkeley and Stanford according to what we argue are key determinants of universities’ excellence, relevance and global competitiveness, we find a troubling picture. Faculty recruitment and promotion processes at many Swedish departments are closed and still not transparent, leading to a large degree of staff being recruited from among PhDs from within the department, a behavior that stands in stark contrast to many of the leading universities. Furthermore, PhD students are to a large extent recruited from within the university and, often, the department from which they obtained their undergraduate degrees. Thus, the talent pool for recruiting future professors and heads of department is effectively often limited to the population of students accepted at the undergraduate level.

The recent introduction of tuition fees for students from outside the European Union and the European Economic Area (EEA) and Switzerland and the resulting dramatic drop in student enrollment from Asia and Africa have revealed that Swedish universities are currently finding it difficult to attract the best students on an international level. We believe that it would be misleading and mistaken to blame the drop in students from outside the European Union mainly on a shortage of scholarships or other funding sources available to these students. Instead we would argue, and we have shown in this analysis, that other factors explain why globally mobile students, or their families, seem to be more willing to pay, often quite heavily, for their tertiary education in the US, UK and Australia, rather than coming to Sweden. One of these factors, we argue, is the quality and focus of teaching and education. In addition to identifying high-quality teaching as perhaps their most important task, many world-leading universities, like Stanford and Berkeley, focus on ‘educating the whole student’ and on providing students with a range of transferable and interdisciplinary skills that are intended to give them a basis for continued professional and personal development. This is often done by offering a liberal arts education at undergraduate level. In contrast, Swedish universities generally force students to specialize early in an academic field or discipline, thus limiting the range of skills most students acquire during their studies.

We also find that Swedish universities have shifted their emphasis strongly towards research at the expense of teaching with disconcerting effects on teaching quality, and, the international attractiveness of Swedish universities. This research bias is partially explained by the fact that in Sweden academic excellence is often equated with research excellence, neglecting the importance of teaching. Furthermore, it indicates an under-appreciation of the key role of students, and thus teaching, in determining regions’ and countries’ competitiveness and innovation capacity. In addition to a growing emphasis on research at the expense of teaching, we see an increasing disconnect between teaching and research with adverse consequences for both activities. One of the ironies of the Swedish system compared to other countries is that, on the one hand, publicly funded research is more concentrated in universities (as opposed to research institutes), while, on the other hand, teaching seems to be more disconnected from research.

Finally, we argue that the discourse on universities’ role in society in Sweden has been based on a very narrow focus on commercialization of knowledge generated at universities in the form of patents and spinoffs. In particular, funding patterns, promotion criteria and policy measures confirm a neglect or denial of the key role that education, teaching and, most importantly, students play in a university’s contribution to its surrounding society.

Swedish universities have undergone a dramatic expansion in recent decades. Student enrollment numbers and faculty size have exploded, propelling universities from a sheltered place of learning and knowledge that was reserved for a privileged elite, to a mass institution permeating society through the large share of the population educated at universities and by being one of the largest employers in Sweden (universities employ 30% of all government employees). Investments in research have also expanded rapidly in the last decade. In addition, the world around the universities has changed, with increased global competition for talent, new labor market dynamics and changing and growing expectations of how universities interact with and contribute to society.

Swedish universities are currently not doing poorly or at least they could be doing a lot worse: they have seen a rapid expansion in enrollment and faculty in recent years and decades, Swedish publicly financed research – the large majority of which is carried out at universities – is good in terms of citations, and there has been a significant increase in their budgets, particularly for research. However, we show in this paper that some current characteristics of the Swedish university system are suboptimal and risk becoming serious challenges for Swedish universities and for Sweden as the global research and education landscape changes. In particular, Swedish universities are weakly organized, with a disjunction between teaching, research and interaction, with a strong tradition of internal recruitment, with unclear promotion patterns, with career paths heavily skewed towards research achievements, with a similarly skewed understanding of the meaning of ‘societal interaction’, and with teaching environments that are not sufficiently attractive to compete at the top level internationally. If these issues are not addressed in their totality, Swedish universities risk becoming unattractive for students, faculty and collaborative partners.

After two decades in which Swedish universities have expanded rapidly in terms of quantity, there is now a need for a qualitative transformation.

In this paper, we have shown that pivotal areas such as recruitment, teaching and the link between teaching and research in Swedish universities are uncompetitive in a global and open university system where students, staff and funding are increasingly ‘de-nationalized’. Addressing these challenges, and turning them into strengths, will require a serious rethinking and redefinition of leadership, both academic and collegiate leadership, rather than a dogmatic insistence on maintaining or abolishing one or the other in their current form.

In the future, universities can no longer take for granted that they will be the natural choice when people in their region are looking for higher education. Furthermore, they need to work harder to ensure that the education and experience they provide, and that the skills and competencies acquired, will make their students employable and attractive on a future labor market, rather than just focusing on conferring degrees.

1. Sweden should introduce a tenure track, starting at the assistant professor level, for faculty who combine outstanding research with high quality teaching.

2. An international search should be initiated for all tenure track positions. Those performing the selection should show evidence that the search performed was likely to reach virtually all potential candidates and that the person selected was the best for the position.

3. Only those who demonstrate consistent performance in both research and teaching should be promoted to tenure. At the same time, there should be a tenured position available for any person hired into a tenure track position who meets tenure standards.

4. Get more serious about ensuring mobility; The Swedish university system and the Swedish innovation system would benefit considerably from greater mobility of people, firstly among universities, secondly, between academia, industry and policymaking, and, thirdly, by attracting more students and faculty from abroad. In particular, more should be done to acknowledge the importance of relevant competence (from industry and public sector) for both teaching and research and to bring it into the universities. Bengtsson (2011) advocates that the number of ‘boundary spanners’, i.e. people who move betweendifferent sectors, be increased in the Swedish university system (p.51).

5. Sweden should modify its university funding mechanisms so that sufficient funds are provided for teaching and the tenure track system of Recommendation (1) is fully supported.

Enhancing the focus on teaching and on linking research and teaching:

7. Carry out more systematic evaluations of teaching (at University level) and offer support for improvement of teaching skills.

8. Consider changing curricula to focus more on skills rather than specific qualifications or degrees

10. Ensure that all universities’ websites contain lists of each course being taught during the academic year. The listing should state who will be teaching it as well as the time and location at which it will be presented.

11. Strengthen leadership of academic institutions, by building durable structures from below (departments that join teaching, research and interaction) and by embedding and regulating these by supportive and visionary faculty and university leaders who support and sustain competitive recruitment and promotion strategies and entice strong academic leadership at all levels.

12. Rectors and pro-rectors must provide the leadership to drive the university towards excellence in both teaching and research

13. Acknowledge and allow for a greater diversity in the Swedish HEI landscape through a transparent, though diversified funding mechanism 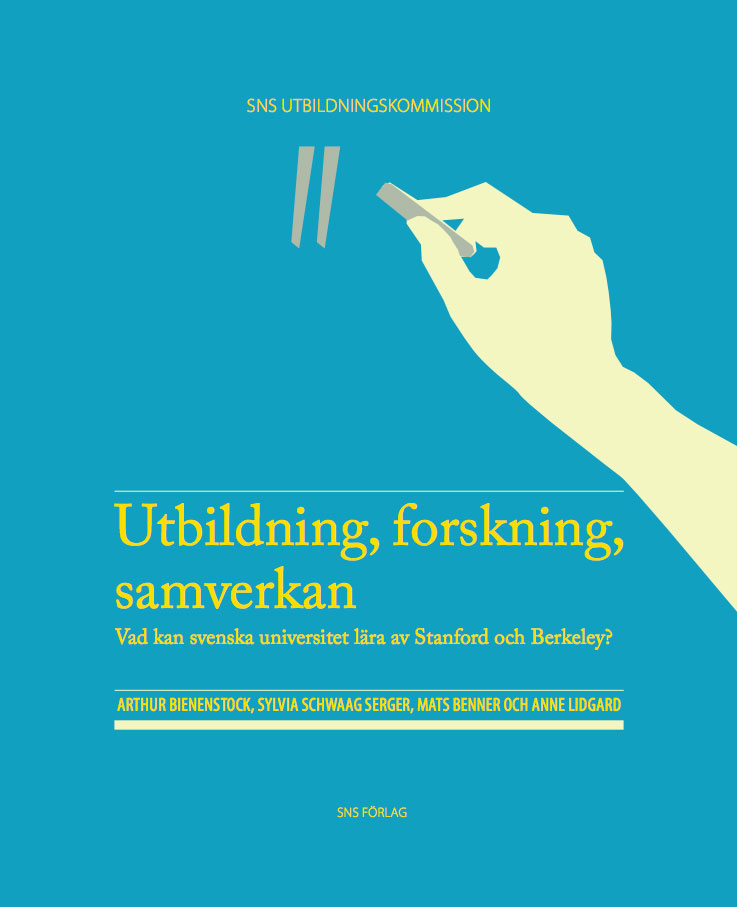