Foreign-born pupils do not perform as well in school as native pupils. In Sweden, the observed differences between these two groups have increased during the last 30 years. The effect is most pronounced for pupils who arrive in Sweden when they are older than 7 years. The observed differences decrease when controlling for socioeconomic status. The results are shown within a new SNS report written by Hans Grönqvist and Susan Niknami.

During the last ten years, the percentage of foreign-born pupils in the Swedish school system has increased sharply, from 6 to 13 percent. In their report, Hans Grönqvist and Susan Niknami show the increase in the achievement gap over the period 1990-2017. The school results among native pupils increased slightly, but primarily foreign-born students perform worse today than previously. The share of foreign-born pupils who become eligible for upper secondary school has also decreased over the period examined. The authors also explore background variables associated with the achievement gap.

– The observed differences are largely explained by the parents’ socioeconomic situation and residential area. Also, the pupils’ age at immigration to Sweden is important, says Hans Grönqvist, Associate Professor in Economics at Uppsala University.
The mean age at the time of immigration fluctuated significantly over the time period under examination, between 7 and 10 years. But even when the mean age was at its lowest, a clear achievement gap is observed. Among pupils who arrive in Sweden at the age of 7 and below, we observe a positive trend, while students who arrive at older ages show a negative trend.

– Pupils who immigrate when they are older naturally have not been in the Swedish school system for as long as natives have. One way to compensate for this discrepancy, at least partly, and enable such pupils to “catch up” is to reinstate subject grades in upper secondary school. Then pupils would receive a final grade the last year in upper secondary. Today, grades are given within specific courses that only run for half a semester or a year, making it difficult for pupils who arrive at an older age to make the grade, says Hans Grönqvist.

To narrow the achievement gap, the authors also recommend broad efforts in labor and education politics for foreign-born adults and early efforts for foreign-born pupils during elementary school. Proposals for lessening school segregation are determined to be less efficient in narrowing the achievement gap. This is because school choice explains very little of the observed differences.
The report is part of the SNS research project Learnings from Integration.

Information about the study

In comparison, the statistical base and outcome measures in the latest PISA-survey was significantly smaller. PISA analyzes the results for 5 500 pupils and focuses on three subjects. 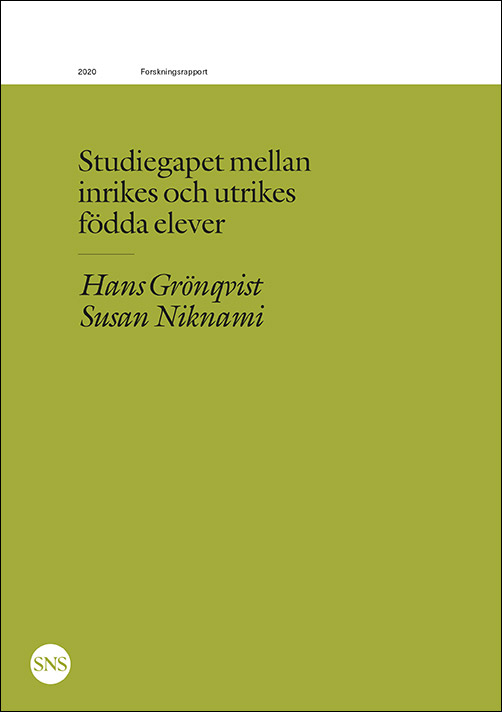